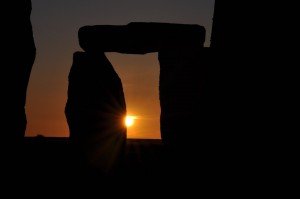 This story is to celebrate the festival of Autumn Equinox. Some call it the festival of Mabon ap Modron, though others say this is merely a twentieth century fancy. Either way, on this night, the metaphor will serve us well enough.

The metaphor is this, the Autumn Equinox, the festival of Mabon ap Modron, is a celebration of balance, when night is equal to day. So, I invite you to give praise to the goddess for the gift of balance: the day with the night, light with dark, man with woman, masculine with feminine, height with depth, joy with sorrow, sweet with sour, summer with winter, spring with autumn, youth with age. Balance with imbalance.

Yes, with balance there is also imbalance, for this is a time of transition, as light, from this time forward, is stolen away into the dark.

Mabon ap Modron simply means the son of the mother. Yet, Mabon is at one level child and, at a higher level, solar deity, son and sun. Modron is at one level mother and, at a higher level, triple goddess – maiden, mother and crone – in her mother aspect. The birth of the son at this festival time is the transition of the goddess from maiden to mother, from fertility to fecundity, from sowing to gathered harvest, from young shoots to mellow fruitfulness.

The story of Mabon ap Modron

This is the story of Mabon ap Modron. When her Mabon is born, he is the light of his Modron’s life. She sleeps with him at her breast, betwixt herself and the wall. When he is but three nights old he is stolen away, and in the morning he is gone. The light of Modron’s life is stolen away into the dark. Only when the dark turns again to light is Mabon discovered and brought forth from the womb of the earth.

THE RESTORATION OF MABON AP MODRON

This is how the story continues. To win the hand of Olwen, daughter of Chief Giant Ysbaddaden, Culhwch has to fulfil impossible tasks, for which it seems he needs the help of Mabon. Yet, noone knows where Mabon is gone or whether he is alive or dead. Culhwch must search for him. His chief guide is his cousin Arthur. His friend Gwrhyr also travels with him, Gwrhyr who understands the tongues of animals and birds. Also in the party are his friends Kei and Bedwyr.

First they seek out the ancient and wise Ouzel of Kilgrwri. He has a crescent moon gleaming bright upon his breast. Yet, the feathers on his wings are fringed white with age. He keeps his wits sharp. And he keeps his beak sharp

by sharpening it upon an iron anvil, an anvil which, over long years, he has reduced to the size of a nut.

Gwrhyr  calls to the Ouzel of Kilgrwri in his own tongue, “Kilgrooree, Kilgrooree, O wise one, know you anything of Mabon ap Modron, who when three nights old was stolen away from betwixt his mother and the wall?”

Alas, in all his long years the wise Ouzel of Kilgrwri had heard nothing of Mabon ap Modron. With his tick tock voice he replies to Gwrhyr, “Ki Ki Ki Kilgrooree, Kilgrooree, I will guide you, this way and that way, to a creature even older and wiser than I, the Stag of Rhendevre.”

They find the Stag of Rhendevre in an ancient forest. He is of massive size, eight feet to the shoulder. His giant antlers branch to no less than thirty two points. His red coat is shaggy with age. He is even older than the very forest in which he roams.

They find the Owl of Cwn Cawlwyd in a deep valley, riven by precipices of towering rock, between craggy hills. He is older than the hills, older than the rocks. He watches them from his perch on a rocky outcrop. He stares at them, unblinking, impassive, through shrewd yellow eyes beneath black crested brows.

The little party climbs the rocks towards his perch. Gwrhyr stumbles forward, calling to Cwn Cawlwyd in his own tongue, “C-hoon c-hoo, c-hoon c-hoo, cooon Cawlooed, O wise one, know you anything of Mabon ap Modron, who when three nights old was stolen away from betwixt his mother and the wall?”

They find the Eagle of Gwernabwy in his rocky eyrie above sheer cliffs. His brooding presence dominates this region of sparse woodland and moors of matted gorse and heather, stretching down to misty cliffs above a wild sea. He is of such immense size he can satiate his vast appetite on deer from the land and seals from the sea.

Once, there was a tall pillar of rock which stretched from the shore as high as the stars. The Eagle of Gwernabwy has sharpened his claws upon this rock for so many aeons of time it is now no bigger than the stretch of a man’s hand.

All day, Gwrhyr climbs the perilous cliffs to reach an overhang below the giant bird’s eyrie. The Eagle of Gwernabwy watches and waits, his eager talons straining with barely contained lust to tear into the young man’s living flesh and the crooked beak to r

ip out his heart.

With a trembling voice, Gwrhyr calls to the great bird high above him in his own tongue, “Gwaarn-abooee, Gwaarn-abooee, O wise one, know you anything of Mabon ap Modron, who when three nights old was stolen away from betwixt his mother and the wall?”

Alas, in all his long years the wise Eagle of Gwernabwy had heard nothing of Mabon ap Modron. With a surprisingly high pitched cry for such a massive bird, and almost a gentle cooing tone, the Eagle of Gwernabwy replies to Gwrhyr, “Gwaarn-abooee, Gwaarn-abooee, I will guide you, this way and that way, to a creature even older and wiser than I, the Salmon of Llyn Llyw.”

They find the Salmon of Llyn Llyw in the estuary of Afon Hafren. From the tip of his nose to the end of his tail

is a full twelve feet and he is all of 200 lbs, the greatest fish ever to swim these waters. And a vessel of such accumulated wisdom that even there, on the shore, the small band could not forbear to kneel in awe and wonder.

The suffering of Mabon ap Modron

Then, the Salmon of Llyn Llyw guides Culhwch, Arthur, Gwrhyr, Kei and Bedwyr up the Afon Hafren all the way to Gloucester Keep. From outside the ramparts they hear heartrending moans and wails, “Was ever a man so harshly imprisoned? Was ever a man so cruelly ill-used as I.”

For, there lay Mabon ap Modron in close confine, cruelly chained and manacled, deep, deep underground, in a narrow cell devoid of light, crying in his agony, “Was ever man so harshly imprisoned? Was ever man so cruelly ill-used as I?”

Those guarding him could not be bribed. Not with silver, nor gold, nor any worldly wealth could Culhwch secure the release of Mabon ap Modron from close confine. The jailors are implacable, for they are not of this world.

Arthur now knows, Mabon ap Modron can not be released without doing battle with sword and axe against the forces of the dark. He summons to his side all the warriors of Britain to storm the citadel of Gloucester Keep. And he sends sappers to undermine the walls.

The sappers build deep pits beneath the walls. They fill them with straw and brushwood and set the whole alight, so the intense heat cracks the great stones. Meanwhile, Arthur’s warriors attack the walls with battering rams and the battlements with a hail of arrow.

As Arthur’s forces break through the walls, Kei bravely leaps through the gap, fighting his way with sword and axe down to the deepest, darkest dungeon.

Kei frees Mabon ap Modron from his chains with a mighty blow from his axe. The man is so weak from his long imprisonment, Kei carries the prisoner to freedom on his back.

The end of the story, restoration of Mabon ap Modron

And so we reach the end of the story. Mabon ap Modron is able to help Culhwch to win the hand of Olwen, and Mabon is restored to Modron, once again to be the light of her life.